In our Messengyr application, we're obviously going to need a database if we want to store data such as users and messages. That's why, in this lesson, we're going to learn about Phoenix's database wrapper -- Ecto.

Ecto works with all Elixir applications, and is the default database wrapper for Phoenix. It supports the most popular databases (Postgres, MySQL, MongoDB) through specific adapters. The default database is Postgres, and that's also the one that we're going to use in this course.

Checking out the database

Remember when we ran mix ecto.create earlier, right after generating our app? We haven't yet gone through in detail what actually happened there, so let's do it now!

Open a new terminal window and launch psql (Postgres' interactive UI) by typing psql and hitting enter. Now that you're in the interactive UI, use the \list command to view all your databases:

You might have some other databases there from previous projects, but among them you should find messengyr_dev. That's the one that was created when you ran the mix ecto.create command before. The name is pretty telling -- this is the database for the Messengyr project that you're going to use during development. If you deploy your application to a production server, Phoenix will automatically name the database messengyr_prod instead, and if you're writing automatic tests, it will create a messengyr_test database. Pretty handy!

Using psql to check out your database can be a bit cumbersome sometimes, so if you want something simpler, I recommend installing a nice GUI app for Postgres. I personally use Postico for Mac. 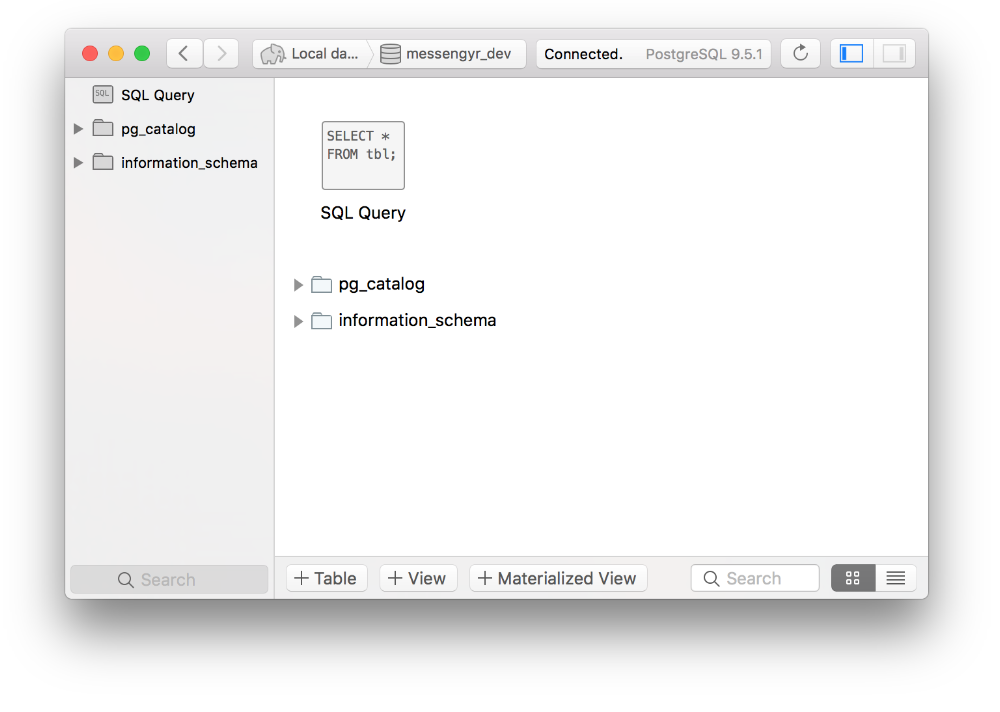 This is what you'll see if you use Postico to open the database.

As expected, there are no tables in the database yet.

A quick note before we start: If you check out older tutorials on Phoenix, you might see references to "Phoenix models" or "Ecto models". However, the concept of "models" has been deprecated since Phoenix 1.3 in favour of Ecto schemas and plain modules, which is what we'll use here.

Let's start with the user schema. Think about what kind of data you want to store for your users. In our Messengyr app, it will be the following:

Phoenix comes with a handy Mix task (mix phx.gen.schema) that helps us generate the boilerplate for this new schema through the command line! Exit psql with \q and run this in your terminal:

If everything went well, you should see something like this, informing you that two files were created:

Let's go through what we just did:

Tinkering with our schema

Before we run the migration command to add the "users"-table to our database, we'll do some small adjustments to the schema.

First of all, we want to make sure that the fields username and email are unique for each user. Open your model file and add unique: true to these fields, so that the schema looks like this:

We also want this uniqueness to be a constraint in the database, so that we can guarantee that no data accidentally bypasses it. Open your migration file and add two unique_index lines after the table creation. The final change function in your migration file should look like this:

Now that we're happy with our migration file, we're ready to run the migrate task. Open a terminal window and run: 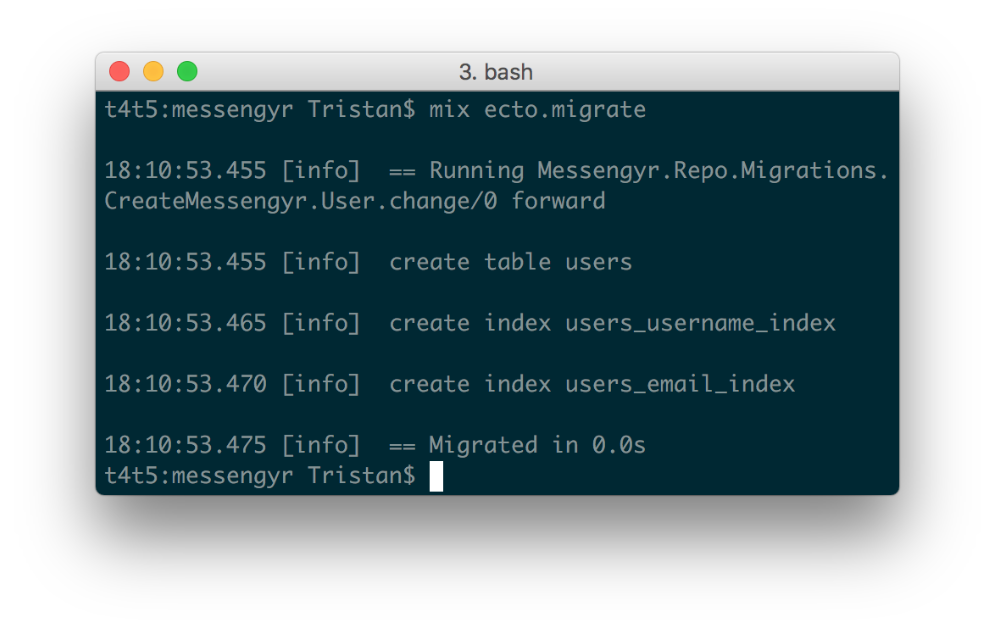 If everything went well, you should see how Ecto creates the new table and then adds our two indices.

Now check your Postgres database, and you'll see that two new tables have been created: schema_migrations and users. 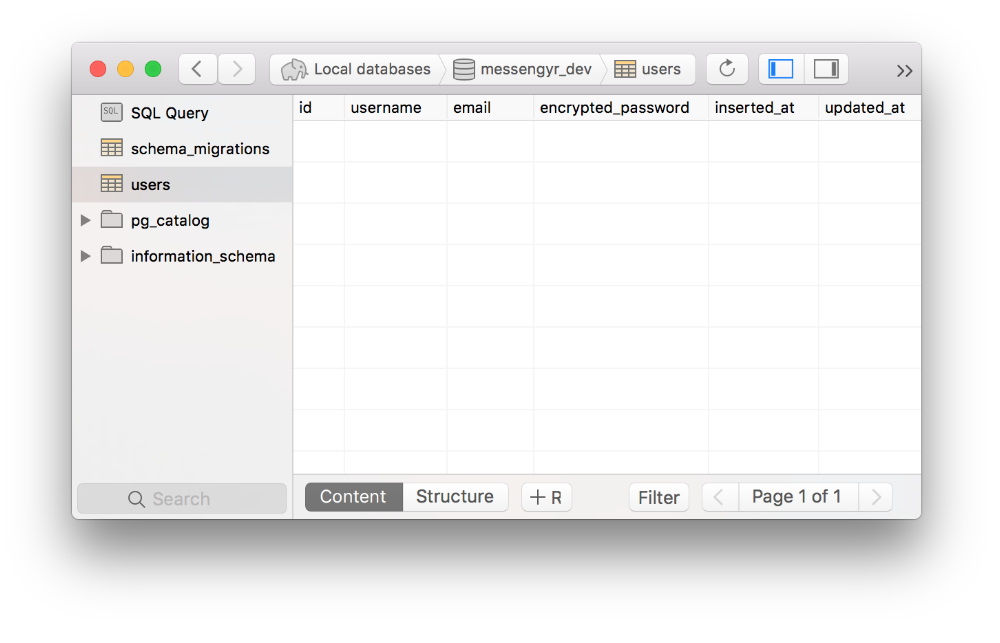 The "schema_migrations" table keeps track of which migrations have been run. This way you can easily compare your development database with the one that's in production, or with your teammate's version.

As you might have noticed, the users table also contains two bonus columns: inserted_at and updated_at. These were added through the timestamps() function in your migration file and are automatically updated. If you don't want them, you can remove the timestamps() line before running the migration command, but most of the time I think you'll find that they are very useful!

If you ever need to do some minor changes to your database structure, always use a migration file, so that the changes are explicit in your code. You can easily generate new ones through the task mix ecto.gen.migration.

Also, if you make a mistake in your migration file, don't be afraid to use the task mix ecto.rollback to reverse the last migration. The rollback command essentially looks at every action in your change function from your last migration file, and then performs the opposite action (create table becomes drop table... etc). 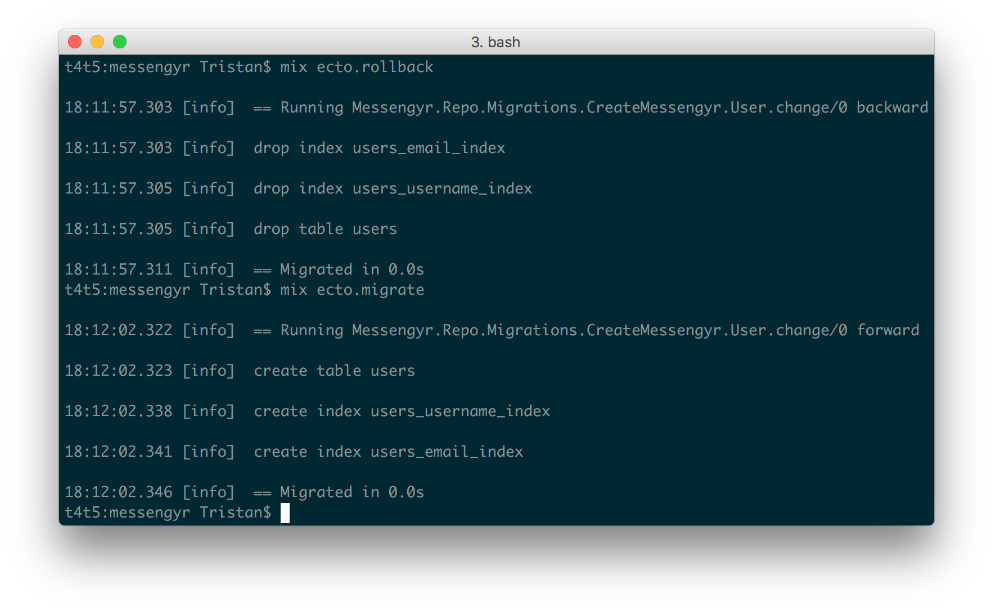 Hopefully, you'll have a basic understanding of how Ecto works with your databases now. In the next chapter, we'll look at how you can edit your model records through something called changesets.